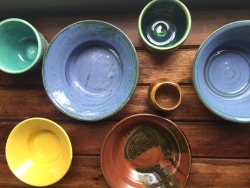 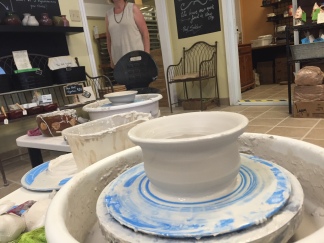 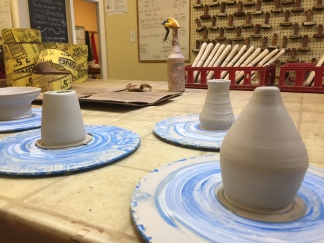 Pottery is a hobby I’ve never considered. Sure, when I see the work of a skilled professional from time-to-time I think to myself “well done, pottery expert!” but I’ve never considered hopping on the ol’ spinning wheel and mustering up my own bowl, cup or vase. That is until Jo-Anne and Gerald of Amaranth Stoneware invited me to try one of their Drop in & Spin classes! I brought my husband for an afternoon of self-growth and bowl-making.

Jo-Anne and Gerald are offering one-off afternoon “spin classes” where rookies can get acquainted with the art of pottery in a safe environment. Over the course of about two hours, participants make two pieces each with Gerald’s guidance and leave them for Gerald and Jo-Anne to glaze and blaze.

I use the word “self growth” because pottery is pretty hard! I initially started with the goal of making a vase and it ended up resembling a bowl so Gerald encouraged me to go with it. Then I aimed for a bowl and made a vase (LOL) so again, Gerald said “well, that was clearly meant to be a vase.”

If you’re a perfectionist, this is a good space to practice patience and acceptance. Or if you’re not into philosophical reflection, this is just a fun thing to do on a Saturday afternoon with friends or your spouse. The act of working a blob of wet clay into something that you can potentially put on display or eat cereal out of is incredibly validating!

The best part — Jo-Anne and Gerald fix up your pieces for you so they don’t look like they’ve been created by a total rookie. A couple weeks later you can pick up your masterpiece! Woot! Our pieces are actually functional and nice to look at.

This site uses Akismet to reduce spam. Learn how your comment data is processed.